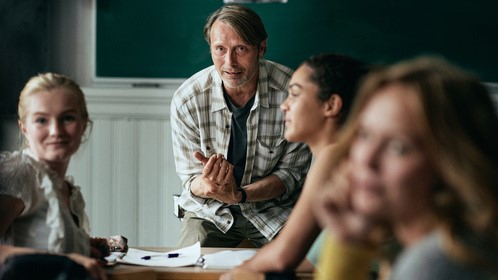 Oscars are not canceled and Filmiere.com hopes it won’t. Countries keep choosing their entry for the Oscar.

Denmark will announce their selection on 18 November but what films are the most possible? One of them is Frederik Louis Hviid and Anders Ølholm-directed crime action “Shorta”, follows two policemen dealing with the rebel in the ghetto.

It did receive good reception at Venice Critics Week. Another one is “En helt almindelig familie”, a more family-oriented drama. But the one that seems to be the official selection is Thomas Vinterberg’s “Another Round”. It got very good reviews, it’s getting buzz and it’s made by one of the most acclaimed directors of Denmark.

As if it’s not enough, it stars Mads Mikkelsen. One of their previous collaborations were much appreciated by the Academy in the Past. At the Danish box office, the drama has sold over 500K tickets since release on September 24.

It’s estimated to ultimately pass 800K admissions, making it the biggest local title in three years. Surprise may happen but this seems to be the title to have an eye on.