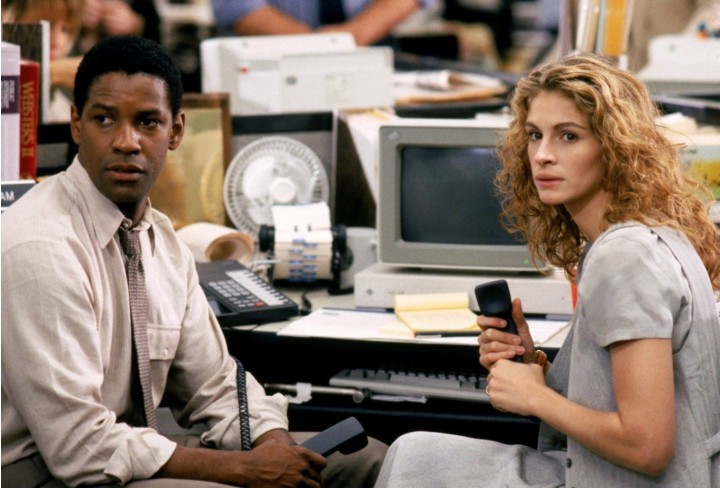 Denzel Washington and Julia Roberts – two of the biggest movie stars alive – are set to be reunited in Netflix film “Leave the World Behind”, which is going to be directed by Sam Esmail (Mr. Robot). This serves as Esmail’s second collaboration with Roberts after “Homecoming” but most importantly, Denzel and Julia reuniting again after “Pelican Brief”.

Who can forget how Julia was so happy to announce Denzel’s name when he won his second Oscar? So it’s got to be a very happy experience for them. The movie will be based on a novel and Filmiere.com can report the official synopsis which says: “Amanda and Clay’s aspirational vacation with their teenage children is interrupted by the arrival of a middle-aged couple who own the holiday home and who have fled an unprecedented blackout in the city.

When the internet, television, and radio stop working, as does the landline, they have no way of finding out what is happening. As strange sonic booms shatter the peace of the countryside, and animals start to migrate in strange ways, the physical and mental health of the families begins to disintegrate. The renters are upscale and White; the owners are upscale and Black.

The issues of race and clash become distractions to the more alarming things are happening all around them.” A very timely, very intriguing premise, and while it sounds like some kind of genre stuff; a mix of horror and thriller, it can also turn out to be an awards-player.